Lady in the Savannah 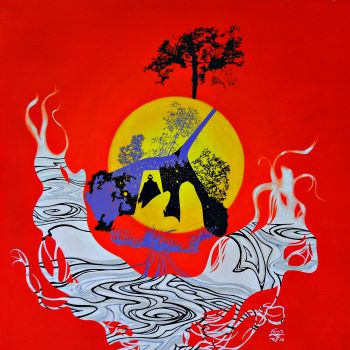 ​Can you take the illustrator out of the fine artist, knowing that the illustrator was there firstly? I think not. This is the first of a series of painting based on one of the unpublished science fiction stories I’ve written. The piece was borne from this: “Above her was an intergalactic alignment of orange outflows, the day’s final abstracts from the brush of a red sun. She was painted saffron.

It reminded her of Sunday curry from Gran-Gran, when mommy and everybody used to be there all the time. Those were the best times. Nobody watched her funny then. The clouds began to take on a familiar shape. It was of a nude woman splayed in wanting from a painting she remembered from an art book with a little boy watching on. Here there were no little boy clouds floating in this picture; there was only a thirty-four-year-old voyeur standing in waiting. She wanted to be like the painted lady, fearless and free. That was why she was here. The dream-man would let her be.”

The dream-man is the foreboding dark figure in the background standing before her bedroom show on the grass. His intensions are darker than the dream-like protagonist’s expectations. This is suggested, among other things, by the tree atop a hill with branches that imitate the Crucifixion. It is as if the tree (a symbol of wisdom) has prophesied the outcome of this meeting between the two foremost figures.